SA Brandy takes to the stage at Veritas

This year’s Veritas top achievers agree that creating a champion is a noble science and an art where absolutely nothing is left to coincidence. Following closely as a vital spoke in the wheel of success is the quality of teamwork from vineyard to cellar. And it has often been stated by top winemakers that whatever happens in the vineyard constitutes 85 per cent of the winemaker’s success.

Wine and brandy enthusiasts, be they true connoisseurs or laymen enjoyers of the delightful juice of the grape, trust the Veritas emblem as a symbol of supreme quality and consistency. The 1 733 wines and brandies that were entered for the country’s oldest and biggest competition for market ready wines, now in its 20th year, had to endure the thorough scrutiny of expert judges and only a select few are now able to wear the prestigious double gold sticker.

“We’re absolutely delighted with the results,” says Frans Smit, cellar master at the Spier Wine Estate outside Stellenbosch on their second successive winning spree at the 2010 Veritas Awards.  “Since I joined Spier in 1995, we’ve invested in our vineyards and this is paying dividends now.  Our vision has always been to make top-quality wines that reflect some of the best South African terroir, and these awards confirm that we’re on the right track.”

Spier’s Private Collection range reflects Smit’s belief that the grape determines the quality of a wine.  Wine enthusiasts are sure to enjoy the rich citrusy aromas complimented by yellow apple and subtle oak of the double gold 2008 Spier Private Collection Chardonnay. This beauty offers a well balanced palate with flavours of butterscotch and vanilla with a long, zesty finish.

Nederburg in Paarl has participated at Veritas every year for the past 20 years and has claimed second place overall for the second consecutive year with double golds for their 1977 Edelkeur, 2003 Private Bin D266 Sémillon and 2008 Private Bin Eminence.

Razvan Macici, Nederburg’s acclaimed cellar master, white winemaker Tariro Masayiti and red winemaker Wilhelm Pienaar share their delight on the accolades won across the Nederburg range: “We regard the annual Veritas Awards as a good indication of the current state of our wines, highlighting the areas where we do exceptionally well and also the areas where we need to improve,” says Macici.

“Winemaking is an act enriched through repetition.  Each time you make a wine, you are honing your craft, bringing to it the weight of experience and intuition,” he continues.  “There is a special moment in every wine you make.  Sometimes it is the arrival of the fruit at the cellar and the anticipation of the challenge to capture its unique flavours, or how often you stir the wine on the lees, or how we bring them together. But always the character of the grape is paramount.  Shaping a unique identity for the wine, you must always show the greatest respect for the fruit that comes into your cellar.” Both the Edelkeur and Sémillon were Museum Class winners.

Simonsig Estate shone at the 2010 Veritas awards with a hat trick of double golds including the only two double gold medals awarded for Méthode Cap Classique this year. The estate who gave South Africa its first bottle fermented sparkling wine back in 1971, confirmed that when it comes to producing world-class Cap Classique, they still have the touch.  The 2006 Simonsig Kaapse Vonkel MCC in Magnums shared its double gold glory with their flagship MCC Cuvée Royale 2005 Blanc de Blancs and the 2008 Simonsig The SMV Shiraz/Mourvedre/Viognier.

“Simonsig is very proud of its achievement at Veritas because with the growing number of new cellars making top quality wines, the competition is getting tougher all the time,” says Simonsig winemaker Johan Malan. “You have to keep improving quality or risk being overtaken. The consumer is looking for guidance of what to buy in a sea of wines on the shelves. The challenge is to make wines that consistently do well at the Veritas Awards and other shows, because it creates confidence in the Simonsig range of wines.”

“We are particularly excited about the two Cap Classique’s that received double gold status: Kaapse Vonkel 2006 and our Prestige Cuvée Simonsig Cuvée Royale 2005. These wines improve over time much like red wines and it is very gratifying when everything comes together five to six years down the line. With MCC wines the blending is crucial, but unlike other wine styles that you put in the bottle will go through a second fermentation which is like a metamorphosis and to see the vision you had come true brings a lot of satisfaction.”

The Simonsig SMV 2008 is a Shiraz driven blend in the Rhone style. “This is the first release of this wine and the Veritas award makes it a great way to launch a new wine. The win was totally unexpected but confirmed our faith in Shiraz as a top variety in our terroir,” Malan says. Simonsig also won gold for the 2010 Chenin Blanc and their Simonsig Redhill Pinotage 2008.

“The Veritas results vindicate our approach when viewed alongside the other awards that we have received in 2010,” says Kobus Basson, managing director and co-owner. “We have been lucky enough to taste success at different price points, with different varietals, and in a number of different countries. Producing commercially successful wines that can also compete with the best in both the South African and foreign markets has been a hallmark of Johan Joubert’s leadership of the winemaking team.” According to Basson one of the most important basic aspects of success lies therein that all members of the team are able to adapt their winemaking styles to the specific conditions of a vintage. “Also, a winning team tries to understand the needs of the consumer as well as the developments in the market,” he expands.

Johan Joubert, chief winemaker and cellar master at Kleine Zalze paid tribute to his team who he acknowledged have gelled into a great balance of experience and youthful verve. “The standards at Veritas continue to push the benchmark of success higher and higher and to be in the company of the other well respected and successful winemakers is both humbling and satisfying.”

Anura Private Cellar situated on the Simondium road just off the R44 has every reason to celebrate after winning 3 double gold medals at this year’s Veritas Awards for their 2010 Anura Sauvignon Blanc Reserve Unfiltered, the Anura Pinotage Reserve 2008 and Anura Merlot Reserve 2006. “We aim to produce wines of individual character that combine the robust fruit of the New World with the elegance and complexity of the Old World,” says Johnnie Calitz, wine maker at Anura. “Our wines must consistently reflect their origin and the unique terroir.”

Their double gold winners indeed give wine lovers a taste of that balance between the New and Old World approach. The winning Sauvignon Blanc with its mineral, grassy and green fig tones, and asparugus and gooseberry flavours is exceptionally well balanced. “It will improve further with1-3 years bottle ageing,” says Calitz. “It was extremely difficult to make predictions as to the outcome of this wine due to the constant fluctuations in weather conditions – from an extended dormancy before budding late in spring, strong winds and harsh rain, to sporadic heat waves in February.”

“The fact that we have performed well with wine from four vintages, a 2006 Merlot, the 2007 Petit Verdot, Pinotage from 2008 and the 2010 Sauvignon Blanc, is really something to be proud of,” says Calitz. “Consistency in this industry is the one achievement that everybody strives towards.” Their 2007 Anura Petit Verdot Limited Release received a gold medal.

For the full results and Veritas news visit www.veritas.co.za. 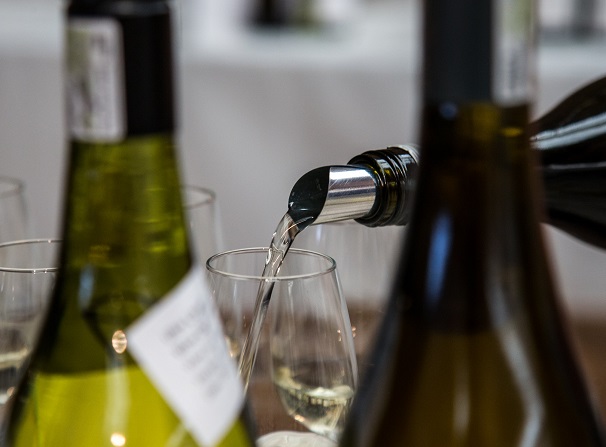 VERITAS 2020 ENTRIES JUST AROUND THE CORNER