Veritas – did you know?

Be the first to taste the 2011 Veritas Winners

Sauvignon Blanc topped this year’s entries with 205 entries, followed by Shiraz (196) and Cabernet Sauvignon (169).  The category for brandy (it is only the second year that brandy is included in the Veritas tradition) drew 36 standard, vintage and pot still brandies.

Christine Austin is an established wine writer of 20 years with several wine books under her belt, and an international wine judge with experience in major competitions in France, Italy, Chile, Argentina, South Africa and China. She is also Panel Chairman at the world famous International Wine Challenge in London.

Johan Larsson is chief wine buyer of South African, Greek, Turkish and Asian wines for the Swedish wine retail monopoly, Systembolaget. Since 2004 he is also the wine adviser to the King and Queen of Sweden.

John Salvi, MW (Master of Wine), has lived in Bordeaux for the last 35 years.  He is also an oenologist, wine writer and journalist, winemaker and a professional taster who is much in demand as judge, consultant and taster.

South African born Nellie Salvi owns Vino Fino Wine and Gastronomy Events, a French based company organising, amongst others, wine tours and technical symposia on both vini and viticulture. She is also a celebrated wine writer for a number of authoritative wine publications and a recognised taster at international competitions in Spain, France, Switzerland, the USA and more.

Lynne Sherriff, MW (Master of Wine), a South African wine consultant based in Britain, is one of the world’s most authoritative wine experts, the first South African chairperson of the international Institute of Masters of Wine, and a qualified Cape Wine Master.

Richard Rowe, currently chief wine maker at KWV, has worked in some of the premium wine growing regions around the world, including the Mosel, & Rheingau in Germany, in Australia’s Clare and Barossa Valleys, and most recently in Margaret River in Western Australia.  Richard has a palate very focused on regionality, quality and wine style which comes in handy when judging wines.

Denis Lahouratate is currently cellar master at the French House of Bisquit Cognac. He started his wine making career in 1984 at Maison Joseph Mellot in Sancerre, but in 1995 he changed direction when joining Léopold Gourmel in Cognac to become cellar master as this esteemed Cognac establishment. Lahouratate, together with Dave Hughes, will take the lead in the judging of the 36 brandy entries.

Dave Hughes, our very own wine and spirits expert, is an acknowledged international judge with extensive experience.  Hughes is also a wine and spirits writer, consultant, auctioneer, architect of the Cape Wine Academy and Brandy Guild member.  In addition to judging brandy, he will also lead various panels for other wine classes.

“The inclusion of international professionals – and in this case one brandy and eight wine and professionals – contributes to an impartial and internationally accepted outcome,” says Duimpie Bayly, chairperson of the South African National Wine Show Association (SANWSA) who annually organises Veritas.  “The Veritas judging mechanism is known to be one of the most stringent in the industry and is trusted and acknowledged by local and international role players alike.”

Judging panels consist of local and international wine and brandy makers, researchers, academics, Cape Wine Masters, wine writers and consultants, augmented by the expertise and experience of the nine international wine and brandy specialists.  A wine judging certificate from the University of Stellenbosch, a Cape Wine Masters Diploma or a similar accreditation is compulsory for inclusion in a judging panel.

Groups of ten wines/brandies are judged blind by panels consisting of seven expert judges.  The wines are then discussed and scores awarded on a consensus basis, according to an international 20-point scale.  A wine/brandy which earns 18 or more out of 20 points secures for itself the coveted double gold medal, gold goes to a 17 point wine/brandy while silver label goes to a wine/brandy with 16 points and bronze to those with 15 points.

To know which wines and brandies will wear the coveted Veritas sticker, enthusiasts will have to wait until the 8th of October when the winners will be announced at the Cape Town International Convention Centre (CTICC) – an event sponsored by Agri-Expo.

Information regarding the various public tastings of double gold and gold medal winners to be held countrywide is available from the Veritas website at www.veritas.co.za.  Contact Elsabé Ferreira for more information at tel (021) 807 3104 or e-mail information@veritas.co.za 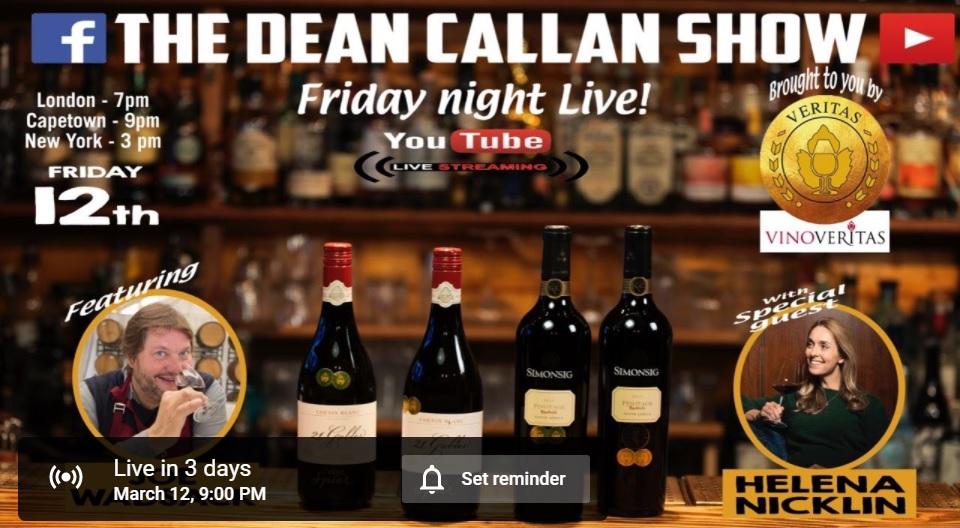