From sips to stats

The judges were unanimous in their verdict: tasting at Veritas is a privilege and a highlight on the wine calendar.

Veritas annually invites internationally acclaimed wine experts to augment the local judging panels. This practice ensures that the judging process, as well as the results, is impartial and internationally accepted. The prerequisite for a local Veritas judge is a wine judging certificate from the University of Stellenbosch, a Cape Wine Academy Cape Wine Master’s Diploma, or similar accreditation.

Lynne Sherriff, chairperson of the international Institute of Masters of Wine, as well as a Cape Wine Master and Master of Wine MW, speaks highly of the way Veritas is managed and presented: “The fact that we only taste between 60 and 80 wines per day, ensures that each wine receives the attention it deserves,” she said. “The individual blind tasting of the wines is followed by an often lively discussion until consensus is reached on the marks to be awarded.”  Accomplished South African wine judge Dave Hughes, who spends five months of the year judging at various international competitions, was in total agreement: “There is not a wine competition in the world with a better judging and management system than Veritas,” he said. “This is an extremely slick operation.  On top of it the quality we get to taste is simply magnificent.”

Sherriff, South African born but based in England, took the lead in the judging of Méthode Cap Classique and Cabernet Sauvignon.  “We tasted an interesting range of sparkling wine styles – from fresh and zippy to more mature. The best sparkling wines came from the Blanc de Blanc and Blend entries, and not so much from the Rosé or Blanc de Noir entries,” she said.  “The outstanding sparkling wines tended to have been in contact with the lees for longer and therefore have a stronger aromatic quality.”

“We tasted 169 Cabernet Sauvignon wines and the best of those shared a common quality of sophistication and a complex integration of fruit and oak.  For me the star of the vintages was 2009.  Wines from that year are really representative of what South Africa should be expecting from a fine vintage.”

Christine Austin, wine writer, international wine judge and a Panel Chairman at the world famous International Wine Challenge in London, slotted in with the panels tasting Pinotage and Chenin Blanc. “We tasted 108 different Pinotages and whereas a singular flavour dominated the drinking experience of SA Pinotage before, I sensed a dramatic shift in the overall quality,” she remarked. “I was delighted to find a new elegance; a greater depth in terms of flavour with elements of fruit shining through more and more.”

“Chenin Blanc is probably the variety which gives international wine drinkers their first experience of a South African wine and if they taste a thin acidic wine, those consumers might be lost forever,” she said. “Fortunately there were quite a number of Chenins that had that desired concentration of flavour needed to hook consumers.”

South African born Nellie Salvi who now lives in Bordeaux, threw in her weight with the Chardonnay and Merlot tasting panels.  “I find that South African Chardonnay have started to move away from being characterised by overbearing flavours to wines with greater finesse which I think the consumer might increasingly ask for in future,” she said.

“Coming from Bordeaux, I know Merlot to be a bit feminine with delicate floral fruits,” she remarked.  “Here fruit is not necessarily the main expression of a South African Merlot.  The styles evidently differ according to the wide variety of soil types and I’ve tasted marvellously structured wines – I was simply fascinated.” Nellie owns a company organising wine tours and technical wine related symposia. She is also a celebrated wine writer and international judge.

John Salvi, MW from France, expressed his delight in the 196 Shiraz wines he tasted.  “I half expected to find stark black wines, but instead I tasted wines showing elements of restraint and good fruit – wines which will age extremely well,” he said.

John also tasted his share of Noble Late Harvest and his verdict is that although this class did not receive as many gold medals as expected, the best wines were indeed splendid.  “When a wine is very sweet, you must ensure that there is a corresponding acidity to balance the alcohol, sugar and acid,” he explained, “and these wines had a lovely natural acidity which must have come from picking the grapes at exactly the right time.” John is an oenologist, wine writer and journalist, winemaker and a professional taster who resides in Bordeaux.  Dave Hughes also tasted the Noble Late Harvests and explained that the 2011 vintage had hardly any Botrytis. “However, they did get a bit of Botrytis on the red grapes and where the result is usually an unsightly brown wine, a few wine makers this year succeeded in creating a beautiful red wine.”

Hughes also led the Port tasting panel: “South African Vintage Port, which is bottled within two years with its colour still red, and Tawny Port, which spends 5-6 years in barrels and has a gold-brown colour, are as good as anything that Portugal can produce,” he smiled.  “Even the Portuguese appreciate our Ports.”

Thomas Lüber, chief buyer of South African wines for WIV Wein International AG – the world’s largest direct wine sales company, gave the Dry Whites a big thumbs-up.  “As a German I was especially interested in the traditionally German varieties such as Gewürztraminer and Wiesser Riesling and I was pleasantly surprised by the high quality,” he said.  “These wines are true to the character of the cultivar and the sugar and structure is just right.”

Swedish wine buyer, Johan Larsson, was part of the panel of judges tasting Other Reds and Sauvignon Blanc. Although he’s a first timer at Veritas, his experience and exposure as chief wine buyer of South African wines for the Swedish wine retail monopoly, Systembolaget, proved invaluable. “In the class for Other Reds it was the Petit Verdot that really stunned me,” he said.  “Whereas a Petit Verdot can be harsh and bitter, I found these wines to be subtle, yet rich in fruit – a cultivar that can stand on its own legs.  It definitely needs not only be used in blends.”

Where the Sauvignon Blanc entries are concerned Larsson said they realized that the 2011 vintage was a tricky one which asked more of winemakers in terms of the handling of the grapes in the cellar.  “The outstanding wines in this class showed beautiful floral character, a concentrated minerality and excellent structure without going sharp.”

Australian born Richard Rowe, currently KWV’s chief winemaker, has had extensive exposure to the wine industry in Australia, Germany and France.  Richard has high praise for the category for Other Red Blends. “This was not what I expected. Whilst the class had a variety of blends, there were many Shiraz/Grenache blends and it was great to see a category which often disappoints deliver flavour, freshness and concentration. The wines were presented by vintage, and it was quite apparent that the 2009’s in particular were very strong.”

Several of the international judges teamed up to evaluate the Museum class. Nellie Salvi described tasting the Museum class as having ‘tasted the Afrikaner heritage of the South African wine world’.  “The wines portrayed their true cultivars and styles and remained fruited and structured enough to be enjoyable after all these years.”  Husband John Salvi commented that this exercise convinced him that South African wines can indeed age gracefully. “I even tasted a 5 year old Sauvignon Blanc and it was mellow and smooth – really very enjoyable.”

The category for brandy drew 36 standard, vintage and pot still brandies and according to panel leader Dave Hughes, they were all outstanding. Co-judge Denis Lahouratate, an international juror, cognac specialist and cellar master at the House of Bisquit Cognac is as excited about the quality of brandy that South Africa produces.  “I found the brandies to be very fruity, as well as softer and elegant,” he said. “Most of them are easy to ’discover’ – very different to the cognac style.  In the older brandies I found more concentration – they are richer with more exotic flavours.”

This wines and brandies which most impressed the international and local judges – those worthy of the coveted double gold, gold, silver and bronze medals – will be made known on the 8th of October at an event sponsored by Agri-Expo held at the Cape Town International Convention Centre (CTICC).

Visit the Veritas website at www.veritas.co.za for information regarding the various public tastings that will follow the announcement of this year’s Veritas champions.  Contact Elsabé Ferreira for more information at tel (021) 807 3104 or e-mail information@veritas.co.za. 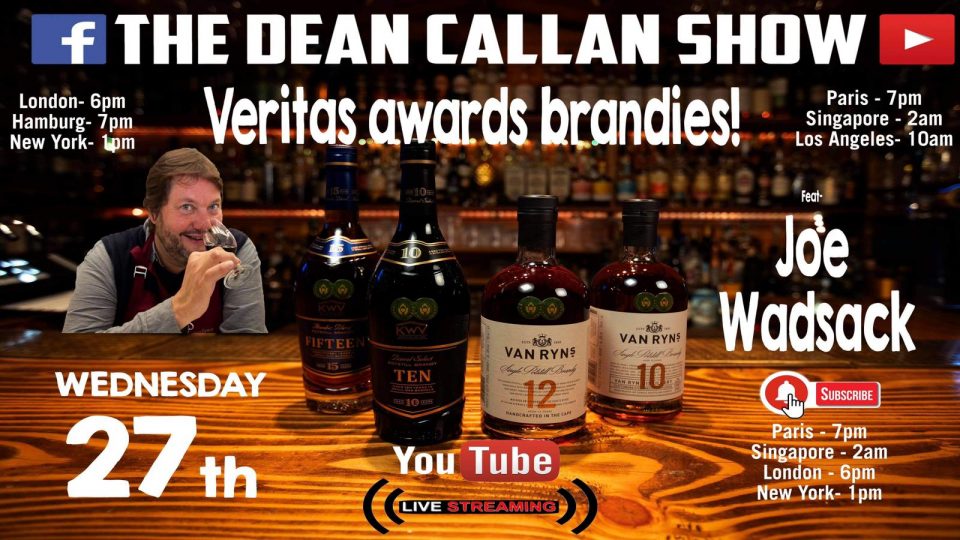